as a kid, i loved my dad's meatloaf. maybe it was just a good excuse to consume ketchup. anyhow, i miss it. but i don't do fake meat... what is the point? ick. so over the past year i've perfected a veggie loaf that uses only whole grains and vegetables. i've served this kasha loaf to a number of carnivores as a main dish with no complaints! tonight's kasha loaf was smothered in a superb barbeque sauce i picked up at a recent seattle underground market (girls gone bbq!) it was a far step up from the heinz ketchup that smothered my childhood meatloaves.

in case you are unfamiliar with kasha (also known as groats), is another name for the whole grain form of buckwheat. kasha is found either raw or toasted. i prefer the nutty taste of toasted kasha, but you can also toast them yourself in a cast iron skillet over medium heat until lightly toasted and aromatic. kasha is naturally gluten free, high in protein and magnesium and very quick to cook or steam. also great in stews! 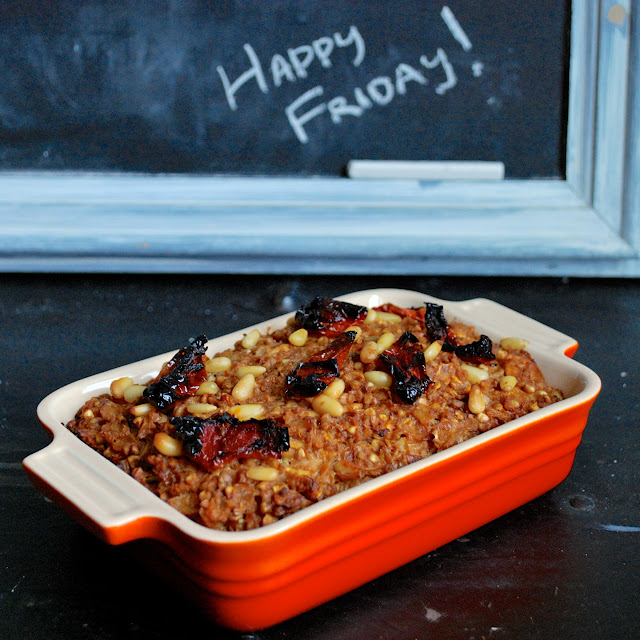 proof of the worlds best break-up: when your ex buys you le creuset for christmas. thanks buddy!!

start by slowly caramelizing your onions with oil in a large cast iron skillet... slowly - maybe 20 minutes or so, until they are golden and soft. in the mean time, boil water and then add in your kasha - stir and let sit covered, until water is absorbed - about 15 minutes or more. while you've got the onions and kasha going, grate your carrot, dice veggies and toss everything together in a large bowl with remaining ingredients. mix in cooked kasha, and fold in the 2 eggs.

line the bottom of a bread pan with parchment paper. plop the kasha batter into your bread pan, give a good tap on the counter to even it out, and then top it with either some pine nuts, thinly slice onion rings, or maybe some ketchup. bake at 375 for one hour or until firm and golden. let cool for at least ten minutes in the pan before turning it out onto a platter to serve.

we topped ours with avocado slices, which tasted great with the nutty, roasted flavor the kasha and went well with the onions and corn inside the loaf. also delicious with ketchup or barbecue sauce. this kasha loaf is probably not as filling as a real meat loaf or a fake-meat meat loaf, but it sure is delicious and a wonderful recipe to try with kasha! experiment with different veggie fillings - maybe sun dried tomatoes and basil, or chipotle peppers and corn? you could also try baking the batter in muffin tins!
Labels: buckwheat gluten free kasha vegetarian