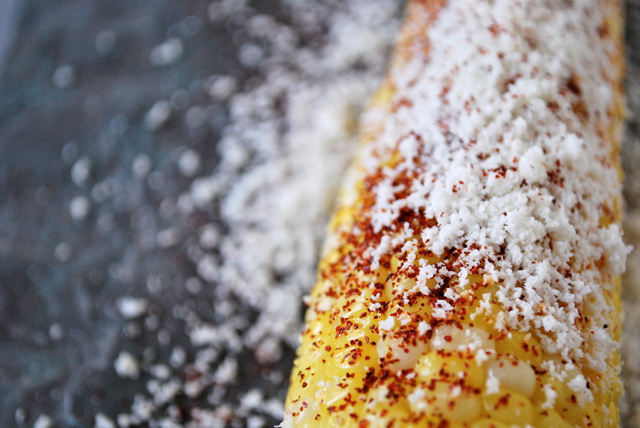 did i mention how much wonderful food we had on our recent trip to orcas island? doe bay cafe is alway delicious - a bit spendy, but rightfully so when the majority of the food comes from doe bay farm and the island's own shellfish farms. there we shared clams in a white wine broth, a foraged mushroom macaroni and cheese and a gorgeous kale salad with edible flowers. over in eastsound (the only real 'town' on the island) mia's cafe servers up a killer breakfast, as does my all-time-favorite roses bakery. during the music festival, however, you don't even have to venture away from the main stage to find amazing food. local vendors (or just some really good home chefs) from around the island set up shop to serve bbq ribs, wood fired pizza, falafel, and the world's messiest corn on the cob. this corn had me drooling, cheese and chili tumbling from my chin, and strings of corn stuck between my teeth. damn was it good though! it begged to be recreated back at home! 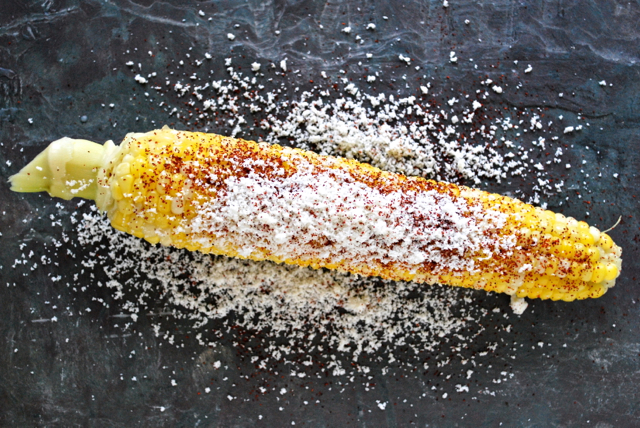 corn on the cob with cotija cheese, chili and lime ~ serves 2


*note: if your chili powder has been sitting around in your spice rack since you-don't-know-when, then go buy some fresh chili powder. it will make all the difference! believe me! also, i just learned that the sugars in corn rapidly turn to starch as soon as you peek under the husk - so just feel for the ends of your ears of corn, rather than peaking in at them to see if the kernels look plump.

in a large pot, bring several inches of water to a boil. husk and boil corn for 4 minutes. remove corn from water and while the corn is still hot, rub the end of a stick of butter all over to coat evenly. cut a lime in half, and gently squeeze and rub the corn with one half of the lime. take a large pinch of chili powder and sprinkle all each ear of corn. top with a dusting of cotija cheese. salt to taste.
Labels: cheese chili corn gluten free mexican vegetarian